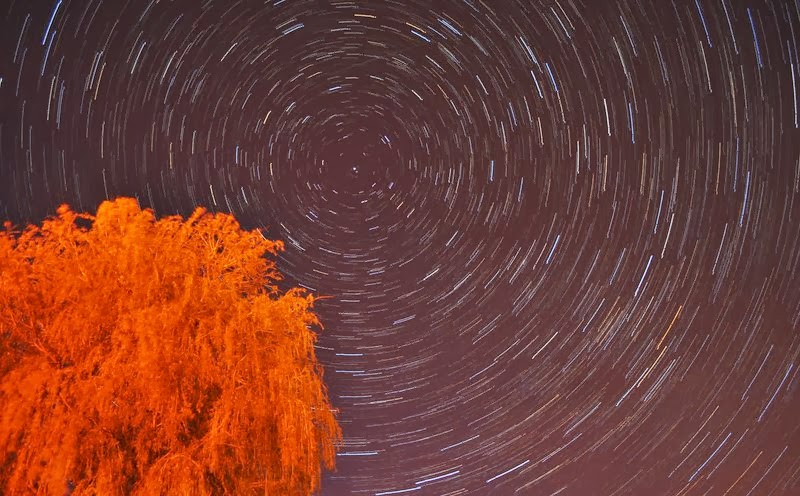 The ancients looked up to the sky and saw a reflection of the earth.  It was a representation of all that was happening or had happened and provided understanding for those learned in interpreting the signs.  When the ancients observed all of the sky revolving around the stationary North Star, of course, they saw it as significant.  It represented the center of the cosmos.

The Navajo call this important star, Nahookos Bikq (Na hoe kos Bih kwo) which means Central Fire.  It is the cosmic center of the Navajo night sky and represents the central hearth, the fire, centered in the home or Hogan.  And in the sky, it burns between the great father/hunter and great mother/provider constellations.  (Note:  Great Father is essentially the Big Dipper, Great Mother is the constellation Cassiopeia)

From “Sharing the Skies” by Nancy C. Maryboy and David Begay: “In Navajo culture, the central fire in a traditional Hogan has multiple values and therefore is extremely important.  It provides stability for the family, as well as a sense of security and well-being.  Nahookos Bikq provides warmth and tranquility as well as a focus, place, and means for ceremonial healing.”

Nahookos Bikq as observed by the ancient Navajo is in the same today.  But, that tells us that this interpretation is fairly recent.  Because of a slight wobble in the axis of earth—called “precession”—the polar north changes over time.  Earth goes through one such complete precessional cycle in a period of approximately 26,000 years or 1° every 72 years, during which the positions of stars will slowly change.  The Egyptians looking at their North Star in 2700 B.C. would not have been looking at Polaris.  They would have been looking at the star “Thuban”.  Today Thuban is several degrees away from center.  In 1100 A.D. even Polaris was several degrees off center.

The cardinal directions were very important to the ancients.  In the ancient Cherokee water ceremony
for cleansing,  they paid tribute to seven directions—up, down, center, east, south, west, and north.  In Chaco Canyon, the Great Kiva called Casa Rinconada is perfectly aligned with a north-south  axis.  Today, we might use the North Star to establish north.  But, in 1100 A.D., when it was built, Polaris was 6-degrees from the pole.  There are several methods they could have used, however.  I think the most likely method was to mark the alignment during one of the solstices when the sun rises due east and sets due west.  Another is the old Boy Scout method of placing a stick in the ground and marking the shadows at the sun progresses.  The shortest shadow points north.

The Ancestral Puebloan, or Anasazi, were an agriculturally based society that build permanent homes and pretty much stayed in one place.  They could build permanent astronomical markers to help them identify important dates using the sky.  Nomadic tribes, however,  could not.  The Pawnee used a sky map painted on a buckskin.  From “Living the Sky” by Ray A. Williamson:

“The north star, whose name in Pawnee is literally “the Star That Dows Not Walk Around,” they compared to the god Tirawahat.  North Star was chief over all the other stars and saw to it that they did not lose their way.  As depicted on the star chart, the north star is among the largest stars, and certainly much larger than those near it.  This is directly contrary to the actual celestial appearance of the north star, which is fainter than, for example, several stars near it in Ursa Major [Big Dipper].” 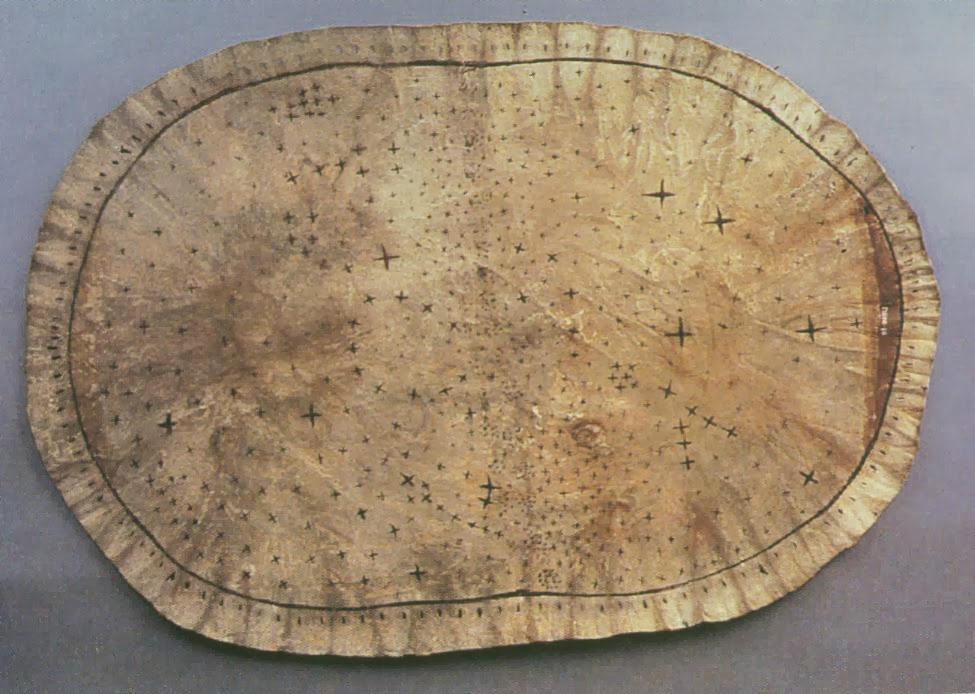 On the chart, the “dippers” of the Big and Little Dippers represented stretchers and the “handles” represented the procession of mourners following.  This came from a story told by the Pawnee about the council to decide where the gods would stand in the sky.  Two members became sick and were carried on stretchers and still journey in the sky this way as a model to the Pawnee for caring for their sick.

Who knows at what point Polaris centered on the pole in the north enough to appear to “not walk around”.   Even 500 years ago, a discerning observer could have seen it revolving around an empty space in the sky.   We assume that ancient mariners used the north star for navigation, but it has only been used for the last 500 or 600 years.  Before that, the sun or constellations were used in conjunction with a “cross-staff” or astrolabe.  Before that, crude compasses were used but they were not very accurate.  Before that, they hugged the shoreline and used line of sight to navigate.  To me it is a striking example of how times change and people adapt.
Watch a NASA video featuring Nancy C. Maryboy and David Begay on archaeoastronomy
by Courtney Miller
www.CourtneyMillerAuthor.com