1 - How the Chumash turned the wayward sun around

From the abundance of the heart, the mouth speaks.  – Chumash saying

For thousands of years the Chumash Indians lived in southern California between present day Malibu and Paso Robles.  At times, the population of the Chumash reached over 15,000 with over 150 independent villages.  Technically, they would be classified as “hunter-gatherer”, but because game and plant-life was plentiful and they had the Pacific Ocean in their back yard, they were sedentary – that is, they didn’t have to move around to find food.

The Chumash were noted for their fine, highly decorated baskets, wooden plates and bowls, their masterfully constructed wood plank boats, small tools, articles of adornment, ropes, twine, nets,  and their especially well-developed rock paintings.  They painted their rock art almost exclusively on the interior walls of caves or rock shelters so they are well-preserved relatively speaking.  But, perhaps what makes their rock art so impressive is the degree of color and detail.  The site we call “Painted Cave” today contains some excellent examples and when I first saw them, I thought I was looking at a beautiful quilt.

The Chumash traded extensively with their neighbors and often used decorative shells almost like we use money today.  As with many of the established, sedentary cultures of the time, the Chumash had a well-developed government and religion.  Like the Cherokee of the east, they were a matriarchal society so that lineage was determined by the mother’s family and chiefs were as likely to be women as men.

Since they were not farmers, they had no need for calendars to tell them when to plant or when to harvest, however, they did develop an elaborate calendar based upon the sun, moon and stars.  As Ray A. Williamson states in his book “Living the Sky”, “… it functioned to support the Chumash desire to understand, predict, manipulate, and control the forces that determined their ‘supernatural’ environment.”

Unfortunately, the mechanics of their calendar is not well-understood today.  The Franciscan priests tried to suppress the “pagan” beliefs and rituals of the Chumash and early researchers often failed to ask the right questions.  But dedicated anthropologists like Travis Hudson and his colleagues and J. P. Harrington of the Bureau of American Ethnology have since managed to piece together a rudimentary concept of their astronomy. 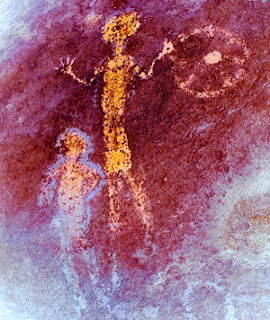 Again quoting from “Living the Sky”, “According to Chumash stories, each night celestial teams led by Sun and by Sky Coyote played a gambling game called peon.  On the night before winter solstice, the winners of each game for the year were tallied to see which team won most often.  Moon keeps score.  Moon’s count is the number of days before or after new moon to the winter solstice.  The consequences of Sky Coyote’s victory would be a rainy year and an abundance of food for humans.  If Sun and his team won the yearly tally, food would be scarce and human lives would be lost.”

Peon is still a popular game among tribes in Southern California.  In the game, there are two teams of two or more players.  Each player hides a short, white bone in one hand and a short, black bone in the other and then the player brings around his hands and crosses his arms.  The opposing team elects a “killer” who tries to determine which hand holds the white bone.  The killer nods right or left to signify which hand he has chosen.  If he is correct, the umpire gives him a “counter” stick.  The teams take turns until one team wins all of the counter sticks (usually around 15).


Next segment will explain how the Chumash astronomer/priests were able to change their fate.

-- Courtney Miller
Posted by Unknown at 4:00 AM